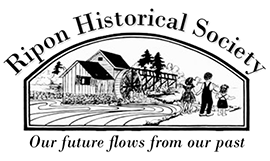 Birthplace of the Republican Party

There were two meetings held in Ripon which led to the naming of the Republican Party. The first held at the Congregational Church on February 28, 1854 included women. At that meeting it was agreed that in the event that the Kansas-Nebraska Bill was adopted, old political parties should be cast aside, and an entirely new organization should be started.

In the Little White Schoolhouse meeting on March 20, Alvan Bovay spoke to the effect that the new party should, and in all probability would, be assigned the name Republican, but he advised against naming it at that time.

A committee was formed consisting of Alvan Bovay, Amos Loper, Abram Thomas, Jehdeiah Bowen, and Jacob Woodruff. Amos Loper’s son A.A. Loper attended the meeting “out of curiosity” and years later summarized it: “The predominant idea existing at that time in the minds of the prime movers was to prevent the further extension of slavery. The matter was then quite favorable discussed, but no real genuine organization was formed; it was simply vigorously recommended. As I recall it, the evening was a severe one, a furious snowstorm raging at the time and the thermometer registering something below zero.

So far as my knowledge goes, in Ripon was made the first move toward giving the Republican party life and I believe this truth has been acknowledged by historians, who have looked at the facts. I have seen it stated that a town in Michigan has set claim to having taking the initial step but this, so far as my knowledge goes, was incapable of proof.”

Meetings of this nature were taking place all over the northern states, and whether the meeting in Ripon was the first is still being debated today. Bovay had the advantage of being from a new state where political machines were not yet firmly established. He knew Horace Greeley of the New York Tribune and he had been advocating for a new political party to be called Republican. Greeley himself had become disenfranchised from the Whig party and declared the Tribune non-partisan. All this together can make for fascinating discussions of the events leading up to the Civil War.

You can find more detailed information on the formation of the Republican party on the Little White Schoolhouse website. littlewhiteschoolhouse.com
BACK
Menu